Group Companies Work with us
BUY YOUR TICKET

Trenoverde Campaign: for a 100% renewable future 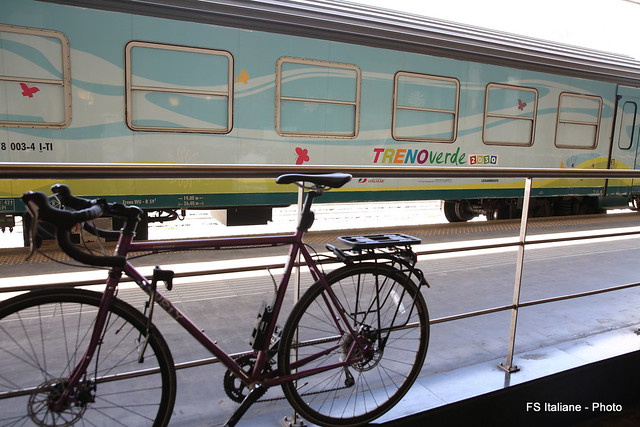 Clean energy, “intelligent” electricity networks, efficiency and sustainable mobility for a country on course towards a 100% renewable future, preparing for the end of the fossil fuel era. That is what the Treno Verde (the Green Train) will depict, as it journeys from the South to the North of the peninsula, in the campaign by Legambiente and the Ferrovie dello Stato Italiane Group, realised with the support of the Ministry for the Environment and Protection of Land and Sea; it has today taken to the tracks to narrate the experiences of local bodies, businesses, and families who have already engaged with the renewable energy revolution. A journey to 12 Italian cities to ask Europe for more stringent and challenging objectives in the 2030 Climate and Energy Framework, still in the discussion phase, and to ask Italy to play a lead role on climate, with more ambitious policies, to give greater substance and solidity to the change already underway, to lead our country towards the total decarbonisation of our energy system.

From now until 2030 is just a short step, and Italy and Europe still have, indeed, a long way to go and no more time to waste. Not least because climate change is a major emergency and is creating increasingly devastating consequences throughout the world. The current commitments to reduce emissions are not enough when global warming is set to increase dangerously. To reverse this trend, Europe must bring its target for reducing its greenhouse gas emissions for 1990 by at least 55% by 2030, fully eliminating them by 2050. An ambitious objective but possible both technically and economically, as this new journey by the Green Train will illustrate, and able to bring benefits to our country, with a 34% reduction in imports   compared to the current trend, producing savings to the EU of 400 billion Euros a year on debt. We only have to consider that European estimates say that with a 35% contribution from renewable energies to gross final energy consumption 13 million lives would be saved due to the reduction in atmospheric pollution, 2.1 million new jobs would be created and 550 billion euros per year would be saved by the reduction in energy imports.

The Green Train 2030 campaign has been introduced this morning in Rome in the conference room of the Roma Termini station by Stefano Ciafani, Director General of Legambiente, Gioia Ghezzi, Chair of Ferrovie dello Stato Italiane, and Barbara Degani, Undersecretary at the Ministry for the Environment and Protection of Land and Sea.

At the heart of its 12 stops will be the transition towards a fairer and more sustainable energy model, with experienced devotees boarding the green train to be hailed by Legambiente as “I RinnovABILI”, (the “RenewABLES”): local authorities, businesses, citizens, associations, start-ups that have taken a chance with new energy models through renewables, efficiency, and new forms of sustainable mobility and who are doing so without petrol, gas, and coal.

At each stop, Legambiente will also present the regional version of Comuni Rinnovabili (“Renewable” Towns” (presented thanks to funding from Enel Green Power), the report that for 12 years has been photographing the development of renewable sources in the Italian regions. During these years, renewable sources have indeed not only exceeded 32% of the national electricity requirement, but, thanks to the million installations of all sizes located right across Italy, they have revolutionised our country’s energy system. Already by 2015, in fact, 100% of Italian towns have at least one renewable source installation and in a little more than ten years, the production of clean energy has gone from 51.9 to 103.5 terawatt hours (TWh), representing a 99% increase in production.

“We want Italy to become a leader in Europe in implementing the provisions of the Paris Agreement to combat climate change - declares Stefano Ciafani, Director General of Legambiente. We have before us a great opportunity to achieve the new objectives for 2030 to reduce climate-changing emissions, to develop renewables and energy efficiency, still under discussion in Europe. This year, Italy must present its own Energy and Climate Plan, and our country, as illustrated by the many experiences we will recount during the Green Train’s journey, has everything it takes to play a leading role in this revolution. However, we need rules that allow installations to be constructed in the regions, simplified procedures, facilitating exchanges between neighbouring users and the removal of the prohibition of generating your own power. We must transform Italian cities into big construction sites, where the buildings become safer and more efficient, and use innovative heating and cooling systems: where travel is increasingly by electric vehicle and bicycle, with an efficient public transport service and modern car sharing systems.  All the subsidies for fossil fuels must also be eliminated; these directly and indirectly reward those extracting petrol and gas, and penalise clean and efficient sources in their bills.”

“For the FS Italiane Group, developing environmental sustainability and introducing measures to achieve the elimination of CO2 emissions into the atmosphere are not just an ethical duty, but are also a priority for the sake of our country’s competitiveness and the economic growth of the system”, stressed Gioia Ghezzi, Chair of the FS Italiane Group. “Creating fully sustainable operating models is a priority for us, one that we are committed to disseminating through all the business areas in which we operate. In regional transport, for example, we have planned investment of more than 4 billion Euros for the new Trenitalia Pop and Rock trains, which will be in service from Spring 2019. The new carriages, 95% recyclable, will be the greenest trains in Europe as they offer a 30% reduction in energy consumption. In the transport of goods and logistics, the Mercitalia hub is ready to play its part in creating the modal shift from tyre to rail and, in infrastructure, Rete Ferroviaria Italiana and Italferr, to contribute to the reduction in greenhouse gas emissions, have launched various initiatives focussing on the rational use of resources employed, reusing excavated material and transporting it by rail. In addition, in line with the objectives of the 2017-2026 Business Plan, we have implemented radically changed business processes, such as the incorporation of ANAS into the Group. Road/rail integration will transform the way infrastructure development in our country is planned, with concrete benefits on several fronts, especially the environmental front. By sharing know-how and technologies, we will develop major projects such as smart roads, intelligent roads that can be used by electric trucks and driverless cars, bringing safety and environmental benefits,”, concluded Gioia Ghezzi.

Even the scientific survey – which will, as always, accompany the environmental train on its journey – has several new features this year. On board will be the results of the survey from Legambiente’s new Civico 5.0 campaign devoted to the themes of improving energy efficiency in construction and the shared-housing economy. In Italy, notes Legambiente, there are more than 2 million residential buildings in a mediocre or worse state of repair and they represent 17% of the total; according to an analysis by CRESME, the great majority were built before the early ‘90s, when the consideration of notions such as saving energy and anti-earthquake measures was almost non-existent.

Legambiente technicians will go into the apartments and houses of families in our country, in order to conduct two sorts of analysis: thermographics and electrical consumption. Energy costs are, indeed, a major component of the family budget: to heat or cool our homes we spend around 1,500 Euros per annum. Yet this cost can be significantly reduced by energy efficiency measures in buildings and by equipment that can make the houses in which we live more comfortable in both winter and summer. The results of the scientific survey enable it to be demonstrated, from a sample analysis of dwellings, how and to what extent it is possible to take steps that bring immediate benefits in environmental and financial terms and for quality of life. Not only this, but today, thanks to the Ecobonus and granting of loans, even families with limited spending options can take these steps that, in fact, broaden the options for renewing Italian housing stock, with advantages including liveability, healthiness of the air, and financial savings.

Thanks to AzzeroCO2, Legambiente and Ferrovie dello Stato Italiane, this year CO2 emissions from the Green Train will be offset by planting trees in public areas and parks in Italy.

Citizens and students will, as always, be able to board the Green train to visit the educational and interactive exhibition, set up within the four carriages, enabling them to come into direct contact with the challenges we are facing between now and 2030, to mark the end of the fossil fuel era and to respond in an effective way to the seriousness of climate change.

In the first carriage, we will talk about climate change and the effects of using fossil fuels and how, on the other hand, it is possible to generate and distribute from clean sources in an integrated way, from sunshine to sea, from wind to underground energy.

In the second carriage, to see for yourself the importance of energy efficiency and the world of sustainable mobility and electricity.

The third carriage “Eco tyres for the climate” will be entirely devoted to the consortium at the forefront of recovering and recycling used pneumatic tyres: the relationship between energy and recycling will be looked at in depth, thus highlighting the very close link that exists between energy, materials and new technologies.

Finally, in the fourth carriage – where, like every year, conferences, debates and workshops will be hosted – it will also be possible to taste exquisite products and foods created with zero emissions: this area will in fact house “renewable food” firms, businesses that produce and transform 100% renewable food products. Visitors will also be able to do a quiz on their own lifestyle and there will be an interactive wall created by the MACA museum of Turin to learn to manage our resources.

The Green Train is a campaign by Legambiente and Ferrovie dello Stato Italiane, with support from the Ministry for the Environment and Protection of Land and Sea

Thanks to AzzeroCO2, Legambiente and Ferrovie dello Stato Italiane who are offsetting the CO2 emissions of the Green Train’s journey

Added to your Press kit